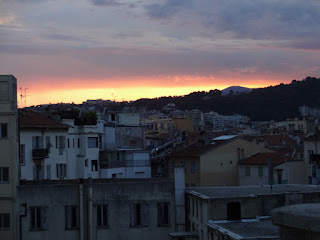 This is the view from my hotel room over Nice at sunset. The tallest point is View Nice and below it is Old town in Nice. My hotel was located in the main shopping district in Nice, next to Louis Vuitton - a dear old friend of mine. This also meant the walk from my hotel to the beach took only minutes. 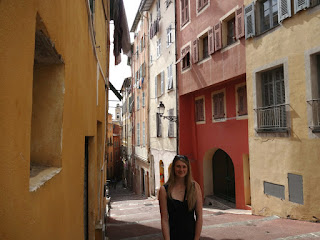 Old Town in Nice consists of small and narrow alleyway with restaurants and shops filling all available spaces.

There are many churches in the area but mainly its ice cream shops. The narrow streets have a completely different feel to the rest of the city and the modern coastline. 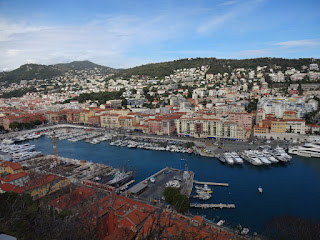 To the left is Nice Harbour, the photo is taken from View Nice. From the other side of View Nice the coast can clearly be seen. The water is much lighter than further down the coast and a lot busier, even though the beaches are made of pebbles rather than fine sand!

In the central public park of Nice there is a fantastic water park, which was full of children enjoying the sun and the coolness of the water. There were also several areas where cold water was sprayed through vents in the ground to cool people down. This created a misty effect throughout the park which did look quite spectacular. 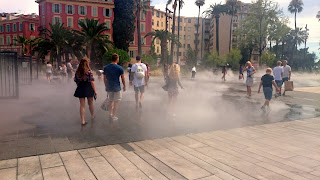 I have wanted to visit Nice since being a young child, however, the city wasn't what I hoped it would be. It lacked character and excitement. The people didn't have a rustic feel and the city itself was nothing to be in awe of.