One of the most interesting parts of history, for me, has always been the Tudors. This was finally a Monarchy that had some stories to tell. I love the Monarchy and I am fascinated by our history, but there is something about the Tudors that the entire world finds fascinating.

Hampton Court Palace was initially brought to the attention of King Henry VIII by Thomas Wolsey - his trusted Almoner. Wolsey transformed the estate into a palace worthy of a King. Following Wolsey's 'failure' to obtain a divorce for King Henry from his first wife Katherine of Aragon, he fell out of favour with the King and at this point King Henry seized the palace for himself.

Around the palace are small pieces of history which show the Kings presence in this magnificent building. Whilst Wolsey was having the Palace built he included Katherine of Aragon's crest into the woodwork. When Henry finally re-married with Anne Boleyn, he removed these and put her crest in its place. Following the beheading of Anne, these were also removed. Today, there are a couple of these badges that still remain!

Henry loved Anne Boleyn very much, he was infatuated with her and completely redesigned the Great Hall in her honour. The hall is beautiful and would have looked magnificent when it was initially built. At the very top, sat on the eaves, are small carvings of men looking down on the people in the hall - eaves-droppers! This is where the term has come from!

One of the most impressive parts of Hampton Court Palace were the tours that are offered there. Actors dress up in the time period and take you around the Palace - showing you secret rooms, all the while acting some of the greatest stories to have come from the Palace. One of the most notable stories is that of Catherine Howard. Catherine Howard was the Kings fifth wife. She was beautiful, young and the King adored her. At this point Henry was more resemblant to the King we imagine - fat, ugly and mean. As time passed Catherine became less interested in the King and fell in love with the Kings favourite courtier - Thomas Culpeper. The Queen committed adultery with him (which wasn't the most intelligent of moves, considering the Kings history) and her love letters to him were discovered. During the tours the whole act of finding out about the love letters and questioning Lady Rochford regarding the incident was presented for us (torture not included). This was excellent as it became part of the one of the biggest ghost stories of Hampton Court palace - the ghost of Catherine running down the hall, screaming and crying, trying to get to her King to apologise - unfortunately she never made it and was beheaded for her crimes. 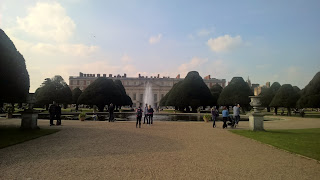 The Palace has two very clear histories - its Tudor history and its Stuart history. After Henry's death, the palace fell to disrepair. It wasn't again inhabited for over 100 years, until King William III and Queen Mary II decided to take up residence. Extensive rebuild work happened under this period, with the original intention to knock the Tudor part of the Palace down and start again. However, with shortness of money, an additional part of the palace was added on. This creates a stark contrast when walking through the buildings as it is quite clear where one palace begins and the other ends.

A further 100 years later King George III abandons the building as a royal residence. Finally, 80 years later, Queen Victoria opens up the Gardens and State apartments to the public free of charge. The building has been open to the public ever since.
By Unknown No comments:
Email ThisBlogThis!Share to TwitterShare to FacebookShare to Pinterest

Fountains Abbey is one of the largest and best preserved Abbeys in England. Built in 1132, this Abbey has been standing since Marco Polo went on his voyage from China to Persia, the black death killed a third of Europe's population, the Forbidden City was constructed in China, King Henry ordered the dissolution of the Monasteries, the industrial revolution and even the first mission to the moon.

My boyfriend and myself decided to get National Trust memberships when I moved to the North for a year for work - there is so much history in the North - there must be loads to see, right? Fountains Abbey was recommended to me before I moved to Leeds - so it became a must see. The day was wet, windy and pretty miserable (I don't believe the weather has changed from this since), but we drove there regardless.

To our surprise, the wet weather was actually a blessing in disguise. The entire World Heritage Site was empty, just us and the National Trust Volunteers present. We were able to see the Abbey in its full glory - the yellowed autumn leaves framing the mysterious building. The rain caused a foggy effect that gave the entire site a spooky feel. It has been said that on some dark nights, a ghostly choir can be heard chanting from the Chapel of the Nine Alters - maybe it wasn't just the misty rain that was haunting us!

The Abbey itself was an amazing building, made of Marble and several stories high. But this was not the best part of the estate - in my opinion, it was the Studley Royal Water Garden. Following the dissolution of the Monasteries by Henry the VIII (an event that would have directly impacted the day-to-day life at the abbey) the estate was sold to a Merchant - Sir Richard Gresham - and the abbey and its grounds entered private hands. The most notable owners being the Aislabie family - John and William. Between them, they created an exquisite water garden that still looks the same way today, as it would have looked back when it was first designed and built.

Surrounding the water gardens are the most picturesque views and forestry, with winding paths that snake up the hillside. Every path is bordered with Pheasants - the males far more brave than the females. One of the winding paths takes you to Anne Boleyn's lookout - although it is believed she never visited Fountains Abbey, there is a headless statue there, watching over the abbey, which is believed to have been made in honour of her!

Another part of this World Heritage site is a deer park, where local wild deer run freely! Seeing these beautiful animals in England was amazing - they seemed so much more majestic than the deer we got close and personal with in Japan! During this time the rain cleared up and the sun (and unfortunately, all the other tourists) came out and we were able to see the Abbey in the sunshine. What this building must have looked like all those years ago when it was in its full glory must have been an extraordinary sight to have seen, and one I wish we had the opportunity to see today!